Reward markers are powerful tools in training – they bring clarity to the specific behavior(s) you want the dog (or any learner) to find reinforcing and repeat again. In addition, marking as the behavior occurs makes it easy to deliver information immediately and follow with the reinforcement next.

Most people are familiar with a clicker or marker word (such as “yes” or “good”) in training. Mark + feed. End of the story, right? Consider the following questions:

Is your head starting to spin when thinking about the above scenarios? Then, consider how your dog feels being the recipient of it all! One of the biggest reasons R+ trainers use reward markers is to increase clarity in training. But are we really being as clear as we think we are?

I first learned about the intricacies of various reward markers through a seminar with Liz Randall and
Rachel Downs. These women are kick-ass agility competitors and don’t win titles via murky communication and training with their dogs. Instead, nearly EVERY way to reinforce a behavior was clearly thought out ahead of time, with specific reward markers in place to communicate when, where, and why reinforcement was coming. I admit when I first learned of some of the examples, I thought, “well, that sounds a little complicated, maybe even overdoing it a bit. Are those different markers really necessary?” Yet, the more I tried out the concepts with my dogs and clients, the more it became obvious that this was a game changer. The dogs quickly picked up on this new style of communication, and the clarity it brought made building behaviors faster than relying on a single reward marker. You don’t have to be an agility competitor to incorporate these concepts into your toolbox. And I would argue that working with behavior issues in dogs should require even MORE clarity in your communication, and therefore, I’d like to explain how you can start using these too.

The way to begin incorporating various reward markers is to have specific markers associated with the type and placement of the rewards you are using. Remember the question from above about using a marker for stationary behaviors? A common method for teaching a dog to hold a position is to mark + feed several times in a row while they are in position. But typically, a marker is often used in other contexts, and the food reward may not always be fed in position (such as clicking for coming when called and the dog moves towards you to get the reward). It’s not uncommon for dogs to want to move out of a position after hearing the marker, especially if you aren’t right next to them. I consider this level of clarity as Dog Training 1.0. It can be effective, but room for improvement.

Dog Training 2.0 of this behavior would include the following:

What about feeding on the ground or treat tossing/chasing games? Treat chasing exercises are a great way to reduce tension and bring more fun to the training process. It also allows you to reinforce away from your body, which can be especially helpful when working with dogs who feel conflicted about being in close proximity to you. I separate the treat chasing from feeding on the ground because they are indeed different – dropping a treat past the dog’s nose after you mark for them looking at a dog calmly is much different than encouraging them to chase the treat. 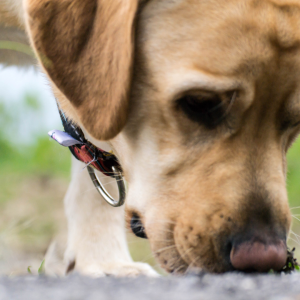 If I’m using a reward that is not food, I name the specific reward or activity:

Sniff? You might be thinking, “I say go sniff to my dog all the time, but not as a reward marker. What’s the difference?”

How do you know if you’re using a reward marker or a cue? Let’s talk treat scatters because most R+ trainers use them – you probably already have it on a verbal cue such as “find it”. You can also use “find it” as a reward marker; I’ll explain both versions. A cue is a stimulus that elicits a behavior – there is an expectation that the dog will respond after hearing (or perceiving) the cue. For example, you say sit, and the dog responds. If you were marking the behavior of sitting, you would mark when the dog’s bottom hits the ground. When you say “find it” you expect the dog to eat the treats you scattered for them. To use “find it” as a reward marker, you would say “find it” AS the dog is doing a behavior you want to reinforce, such as noticing a person walking past their home and they remained quiet. It is contingent on a specific behavior that YOU choose vs. scattering treats in general (such as when a dog is feeling stressed, and you want to lower arousal). Do dogs find both versions reinforcing? Yes. The difference is the timing and intention of when you say “find it” which determines which category it falls under.

During a workshop I did with Kellie Connell (a hugely talented IGP competitor), she focused on the dog’s emotional state within various reward markers. During Kellie’s workshop, we ran through all of my reward markers with my dogs. We evaluated their body language with each one – were there any differences? I was surprised to see that there were. They both LOVED “get it”; you could see their bodies perk up with genuine joy on their faces as they chased the treat. They were so/so about “find it” (treat scatter), and we figured out that it was because I use “find it” to end training sessions, so this was less about the act of scavenging for food and more about the fact that I paired it with the ending of something they enjoy. They liked “follow” (treat magnet) but did not show the same joy as chasing the reward since I delivered it to their mouths.

A note about running through the reward markers – we assessed each marker by going from one to the next. We weren’t using the reward markers to reinforce something specific. This version is a reward system – HOW you are rewarding a behavior. In this particular context, I would compare this most closely to using the same word, such as “get it,” as a cue vs. a reward marker.

If you have different reward markers conditioned, run through them to see how your dog responds. I encourage you to video your session so you can take a closer look at your dog’s body language and see if there is anything you missed in real-time. I think you’ll be surprised to find that they are not all equal to your dog.

Changing a dog’s emotional state is a large part of our behavior modification work. By paying closer attention to the reward markers we are using and the changes in the dog’s body language depending on the marker, we can make a more significant impact on their emotional state during training. And by bringing more clarity to where the reinforcement will occur, we are more predictable. I can’t think of a more critical piece to behavior modification than predictability.

Using various reward markers requires the following to be effective:

Sounds challenging, right? It can be, at first. And if it’s difficult for us as professionals, it might be out of reach for some of our pet dog clients. We all know how common it is for new clients to struggle to get the timing of their reward marker down, let alone add various words and food placements to the mix. I don’t want to throw the baby out with the bath water, though. Yes – these concepts come from the dog sport world, and most of our clients have pet dogs. Yes – we must ensure our training plans are doable to ensure a successful outcome. But – increased clarity in training is always a win. For this reason, I tend to stick to 2-4 reward markers at most with clients.

Suppose you’re offering Home School programs or Board and Train services. In that case, you can more easily incorporate various reward markers because when you are ready to transfer the behaviors to the owners, the dog should already have a strong understanding of the behavior at hand. Or, if you have a savvy client with great mechanical skills, adding in a few reward markers can be a fun learning experience for them and their dog.

One of the things I love most since incorporating these concepts into my toolbox is seeing how quickly the dogs can learn the differences between the reward markers. This expansion in communication makes me wonder what else we can do to deepen our communication with dogs. This ever-evolving field has me very excited about what I might learn next.

Speaking of learning, have you registered for the Aggression in Dogs Conference yet? I’ll be speaking about this topic (along with a few others) in my Advanced Concepts in Leash Reactivity presentation. I hope to see you there! 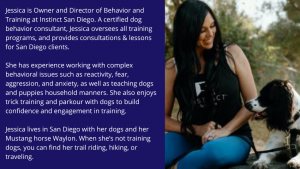 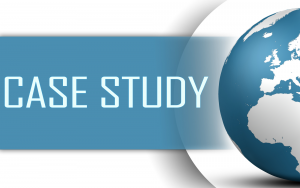 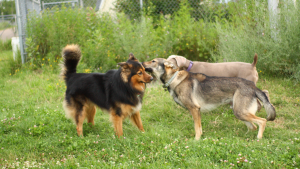 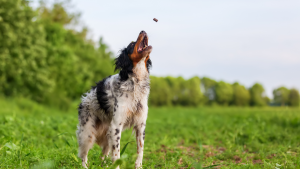